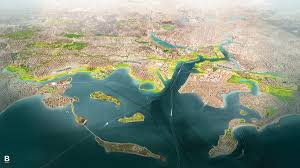 Climate Change and the Future of the Boston Coastline

Boston is a coastal city with a complex of rivers, dams, harbors and islands. By the end of this century, under the foreseeable range of global warming scenarios, Boston could experience a sea level rise ranging from 2.4 to 7.4 feet. The potentially disastrous effects of such sea level rise, along with higher storm surge and land subsidence, pose significant challenges to any coastal city’s long term planning. Fortunately, new imaging and modelling techniques offer scientifically grounded tools for more accurate risk assessment and more effective mitigation planning. 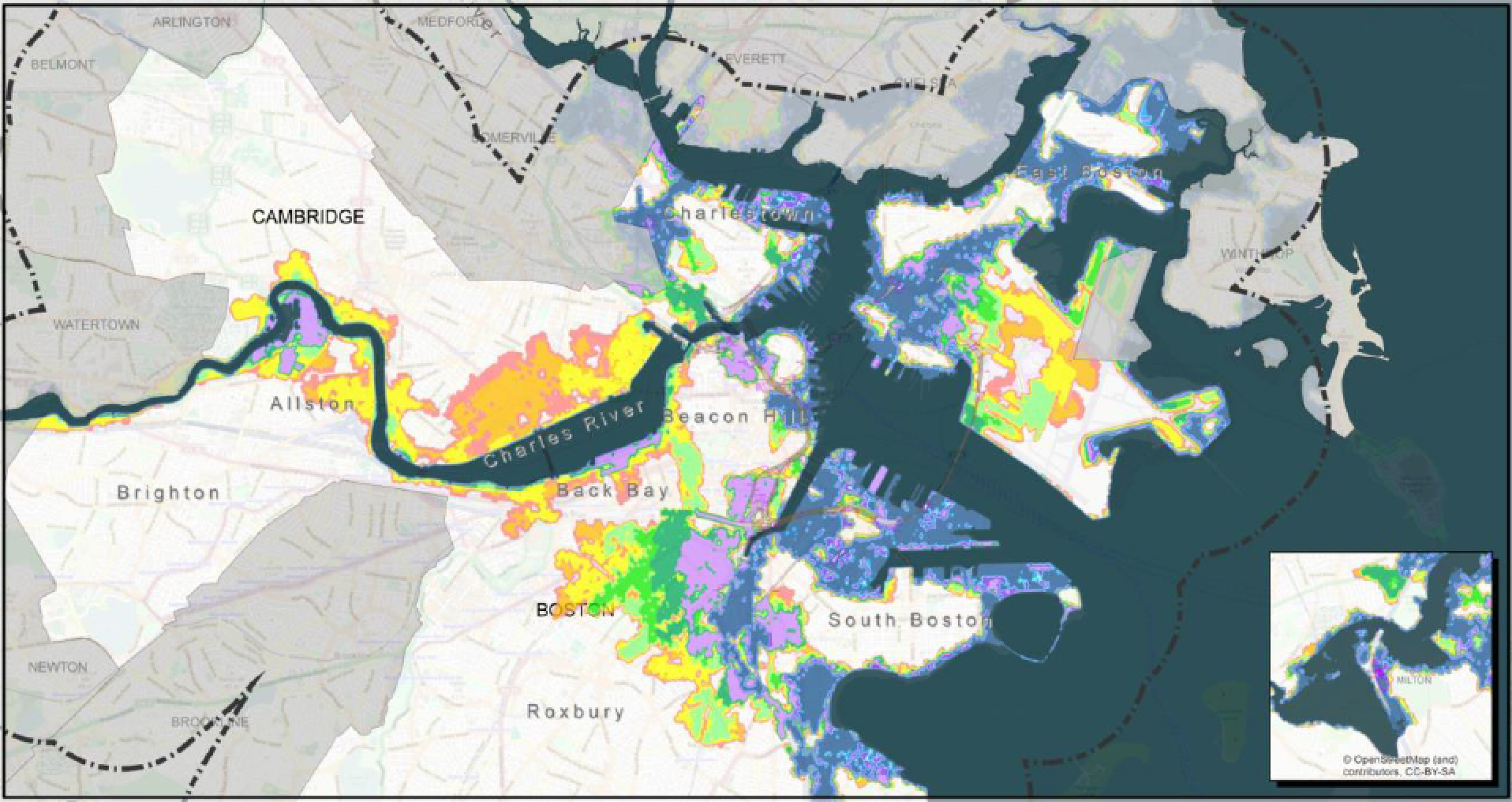 Many Layers of Uncertainty:

Paul Kirshen and Kirk Bosma emphasize that planning for climate change is a particularly thorny problem due to multiple uncertainties. Not only are the dynamics of geological and meteorological systems incredibly complex and multi-faceted, but so, too, are the human industrial and social systems that are now impinging on those natural systems. City planners trying to plan major infrastructure projects may ask how much the climate will change in the next 100 years, but the detailed questions are: How much will the sea level rise? How frequent will the storms be and how much storm surge will we experience for how long? What rainfall levels do we need to plan for? Where and how much will the land in Boston subside over this time period? Answers to these questions depend on the answers to more questions: How much carbon and other greenhouse gases will human activity add to the atmosphere? How will this influence average temperatures, glacial melting, ocean currents, the severity of storms. These questions raise other questions: What policies will global institutions adopt and when? How many people will there be, where will they live, and what will they consume?

Under carbon emission scenarios ranging from a rapid decrease from current levels to a “business as usual” tripling of emissions, global average temperatures in this century are expected to rise from between 4 degrees Fahrenheit to potentially more than 8 degrees Fahrenheit. Storms will worsen, rainfall will increase in some areas, and sea levels will rise. The most up-to-date modeling of the implications for Boston suggests a sea level rise of between 2.4 feet to a high of 7.4 feet. In comparison, sea level in the Boston area over the last 50 years has risen by a foot, half from the subsidence of the land and the other half from a rise in sea level.

Under even the most optimistic of scenarios, Boston will be increasingly vulnerable to significant and potentially disastrous impacts from a direct hit by a major storm such as Hurricane Sandy. Risks of periodic flooding from high tide conditions will also increase as sea levels rise. A lot of the Central Artery and connecting roadways are underground and subject to flooding risks. This infrastructure carries a huge volume of traffic in and around Boston and is key to mobility as well as to commerce. Many residential and business areas in and around Boston are low lying and vulnerable to flooding.

Historically, planners tended to look at sea level rise with a bathtub analogy – areas will flood simply depending on height. But more detailed assessments of topography, structures, wind patterns, floodwater pathways and potential damages demonstrate that the bathtub assumptions are flat out wrong. Strong storms, including nor’easters and hurricanes, can move a tremendous amount of water through wind, waves, storm surge and heavy rain. All of these inputs need to be considered in the context of local topography, along with sea level and tidal patterns.  In addition, any assessment of the costs and benefits of possible fixes depends on the frequency and variety of specific storm conditions.

Paul, Kirk and other researchers have developed detailed digital representations of waterways, barriers and elevations in and around the Boston coastal areas and waterways, and modeled their behaviors during historical and postulated storm events. These tools offer precise identification of the key vulnerabilities and potential impacts from severe storms.

The first question many people ask is whether we can block the incoming ocean water by putting a huge barrier across the Boston Harbor. Paul led the preparation of a report released in May 02018, on three harbor barrier options: an 18-mile dike with locks ($80B), a 3.8 mile outer harbor barrier with two sector gates ($8B-$12B), and a 0.5 mile inner harbor barrier with a single sector gate ($6B-$9B). The mitigation benefits for these massive projects would, unfortiunately, only last a few decades, and they would create serious limitations on shipping traffic and damage to the ecology of the harbor. The calculated benefit cost ratios for these options did not rise above 0.33. (A ratio of 1.0 is break-even.)

In contrast, shore-based mitigation strategies, developed in conjunction with fine-grained modeling of flooding vulnerabilities and probabilities, can be much less costly, less disruptive and more flexible. They can avoid the shipping and ecological impacts of barriers, while also bringing positive amenities to a neighborhood. One example: The Charles River basin is presently reasonably protected by its dam under high-water conditions, but under climate change and sea level rise, there is the risk of flooding from one low area on the banks of the Mystic River to the North. Raising the banking on that section of the Mystic River prevents the overflow and protects the Back Bay and Cambridge communities, at a very reasonable cost, although the dam itself will also, eventually, need to be raised.  If designed well, the local neighborhood near the Mystic River benefits from the addition of green space along the banking. This is an example of “co-benefits,” an important design feature of shore-based mitigation strategies that can make such strategies more acceptable to a local community while insuring significant benefits to the larger region.

Fixing all the points of vulnerability in the Boston area with such shore-based mitigation measures results in an overall benefit/cost ratio of between 3.2 and 7.9.

At the same time, however, measures need to be put in place to insure that future construction or reconstruction in vulnerable areas takes future flood risks into account. For example, the Spaulding Rehab Center on the Charlestown waterfront is designed for high water levels and uses parkland as a buffer. There will also be locations, and circumstances, where the most cost-effective decision will be to retreat. Allowing such areas to return to tidal marshlands will improve the local ecosystem and provide better flood protection to the areas further inland.

After the Current Plan:

Beyond 2100, if sea level continues to rise to 8 or 10 feet above current levels, more drastic measures may be needed. Fortunately, unlike many other coastal cities, Boston does have the benefit of higher ground. While emergency services and active buildings may need to be concentrated in smaller geographical areas, and more low-lying areas may have to be abandoned, the City of Boston as a whole should be able to thrive, if proper measures are put in place on a timely basis.

The key for successful cities of the future will be to remain flexible and resilient in the face of future climate challenges. One of the tools described by Paul and Kirk is a method referred to as Dynamic Adaptation Pathways. As a City proceeds down one adaption pathway, they still keep all possible mitigation response strategies on the table. They can then identify the decision points where switching from one pathway to another is feasible – and necessary. This method offers the benefit of deploying low cost mitigation strategies first, for as long as possible. Yet, if conditions continue to deteriorate, updated information and modeling will trigger the launch of more intensive and more costly measures on a “when needed” basis.

Paul Kirshen and Kirk Bosma have provided a positive framework that the City of Boston, and other coastal cities, can used to address the challenges of climate change. The framework is scientifically based and data intensive and yields insights on adaptive strategies to protect Boston from disaster while promoting long term thriving for the City and its neighborhoods. This conclusion echoes that from our September 02018 panel (Barry Bluestone, Peter Rose and Tamara Roy) on The Future of Housing. What does it take for a city to thrive over the long term? “We can learn to respond flexibly to the rapidly changing factors of economics, demographics, technology and human preferences. If we do so, we will be better able to navigate a steady course over the longer term.”

Paul Kirshen, Ph.D., is a Professor in the School for the Environment at the University of Massachusetts Boston and serves as the Academic Director of its Sustainable Solutions Lab.  Paul has 30 years of experience in complex, interdisciplinary research related to water resources management, and climate variability and change. He holds Sc.B., MS, and PhD degrees in civil engineering with an emphasis on systems applications.  His interest in climate change is focused on the integrated vulnerabilities of built, natural, social, and economic systems to climate change and sea level rise (SLR) and the development of adaptation strategies to these stresses. He uses a variety of qualitative and quantitative methods. He currently has research efforts in metro Boston, NH, coastal MA, and other areas. A major project is on environmental justice and climate change adaptation in East Boston.

Long Now Boston is a 501(c)(3) non-profit organization that is independent from but philosophically aligned with the Long Now Foundation. Long Now Boston provides a forum for discussing, investigating and engaging in issues that have long-term implications for our global cultures.  Long Now Boston hosts a monthly Community Conversation series in Cambridge, MA.   Please sign up to the Long Now Boston Meetup Group for notices. 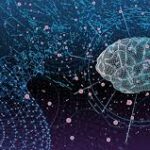 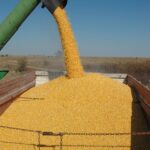 Next Story
A CALL FOR RATIONAL SKEPTICISM ABOUT FOODS — INCLUDING GMO