PEELING BACK THE LAYERS – MY PERSONAL JOURNEY (EPISODE 4)

I’ve always been intrigued by the onion metaphor – peel back the layers of the onion to discover the deeper truth. It’s a good analogy for reductionism – the process of seeking knowledge by going beyond the appearances to the reality beneath. Beware, however — the end result is not what you expect!

Physics explains things by reduction. Objects are composed of molecules, which are composed of atoms, which are composed of neutrons, protons and electrons. These, in turn, are composed of quarks and other subatomic particles, which behave in accordance with the fundamental laws of physics. In the 20th century, discoveries in relativity and quantum physics revealed incompatibilities between the world of quantum and classical physics. Many believe the inconsistencies will eventually be explained by even deeper theories, potentially involving mathematical strings or membranes, abstract symmetries or pre-geometrical features of underlying reality.

In turn, reductionism postulates that the reality we know is built up from the fundamental constituents, in a set of causal relations. The fundamental constituents of physical reality, be they strings, branes or symmetries, drive the manifestations we observe as quantum phenomena. These phenomena cause the configurations of particles and forces, and the resulting behaviors at the classical level, to be what they are. This is Physics. The properties of these particles and forces in turn cause the atomic and molecular interactions that we know of as Chemistry. Chemical behaviors ultimately cause self-replicating chemical reactions of increasing sophistication, which leads to Biology. Biological evolution causes increasing diversity and complexity. This process eventually caused the development of conscience sentient beings, with the capability of studying this entire causal chain.

Some physicists, and other scientists, believe that knowing the precise physical states at the quantum level would provide perfect and total knowledge from which the trajectory of all physical reality, including chemistry, biology and human consciousness, could ultimately be derived from the laws of physics. This is a lofty, and perhaps laudable, aspiration. However, in this framework, any possible source of knowledge not grounded in fundamental physics, including our immediate human experience of feelings, intuition, imagination, choices and love, have been stripped of any causal relevance. They have no knowledge value.

We experienced a similar reductionism in philosophy over the past 400 years. Rene Descartes cast off the Aristotelian appearances to reveal the hidden “Cogito ergo sum,” the interior mind of humans from which all thought originates. David Hume later dissected the Cartesian self into “bundles of perception” without epistemic significance. Ludwig Wittgenstein reduced even these objects to mere linguistic forms and logical processes and concluded his Tractatus: “7. Whereof one cannot speak, thereof one must remain silent.”

Late 20th century neuroscience followed a different reductionist path by reducing human consciousness to the neural correlates of consciousness. Consciousness has become a mere abstract epiphenomenon to the determinate biological functioning of the brain. Either path reduces knowledge to mechanical or abstract logical processes, effectively draining the meaning from human experience.

Reality is Emptied Out

We are in a place where human experience, philosophy and consciousness are without value and presumed dead. William Barrett put it this way: “We have come to understand the phenomena of life only as an assemblage of the lifeless. We take the mechanistic abstractions of our technical calculation to be ultimately concrete and “fundamentally real,” while our most intimate experiences are labeled “mere appearance” and something having reality only within the closet of the isolated mind.”

Peeling away the layers of an onion does not yield more information about an onion; it just reveals more layers. As the delayering process continues, the onion is destroyed and its identity and integrity, its “onion-ness,” vanishes. There is nothing left.

In the process of peeling an onion, either real or metaphorical, one may be brought to tears. In philosophy, we find nihilism, the belief that nothing matters. In science, determinism yields a cold and lifeless world devoid of freedom or joy. In culture, we live materialistic lives, our value exclusively measured in terms of possessions, experiences, money or status.

What is the end if you spend a lifetime peeling back the layers as if life were an onion? Who are you? What do you mean? Nothing. There is nothing left.

Vastation is a good word to describe this experience – one is emptied out. Appearances are “mere”; substance and meaning are gone.  The pieces of my life, and my understanding, were strewn and shapeless on the ground. Yet that emptiness also begged for something to fill it.  This is a good place to start a new chapter. 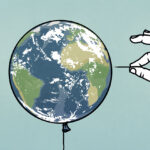 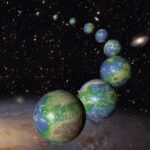 Next Story
THE UNEXAMINED FAITH AT THE FOUNDATIONS OF SCIENCE