A New Resurgence of Progressive Action

The progressive agenda for peace, justice and environmental sustainability has certainly been darkened by black clouds, here at home and across the globe. But as John Milton noted in the 17th century, every black cloud has a silver lining. My new PEP Talk Black Clouds and Silver Linings highlights some of the inspiring news that documents a resurgence of civic activism and gives hope for a better future. Watch it on youtube, see a quick summary below, or read the full transcrip at the end of this post.

While climate change denial has gotten great coverage in media in the last year, public concern about climate change has actually increased. Jeremy Deaton of Nexus News Media noted that “the public has grown more concerned about the climate, [and] it has also become more trusting of the press and more supportive of immigration.” And environmental groups have had a record year in new member recruitment and financial donations. There is a big, new infrastructure being built in the environmental movement, thanks to President Trump.

The Women’s March last year also kicked of a groundbreaking year for women’s activism and women’s equality, as the #METOO movement demonstrates.   Stephanie Schriock, President of EMILY’s list, noted in an NPR interview that the number of women seeking political office increased from 920 to 30,000 in the past year. “We’ve never seen anything like this.”

Gun control and gun safety is dominating the headlines, as the survivors of Parkland confront political posturing and an increasingly aggressive NRA agenda, after the worst year of mass shootings in US history. The #NEVERAGAIN movement continues to build. The Guardian Newspaper reported earlier this month that there are now more members of Everytown USA for Gun Safety than there are members of the NRA.

The lesson for concerned citizens is simple – do not get discouraged. Continue to be vigilant, to seek out and promote the truth and to support actively the things that you care about. You may not see a positive outcome on the horizon – but we need to have faith that human beings are basically well intentioned – and to sustain the hope that together we can build a better future.

This is the sixth in a series of PEP Talks produced for Promoting an Enduring Peace, each addressing a different topic in global peace and environmental sustainability:

Hi, welcome to PEP Talk. My name is George Gantz. I’m a member of P-E-P, Promoting Enduring Peace.   Our motto is: Peace on Earth – Peace with Earth.

So here we are in 2018, and for those of us in the progressive community, things look worse than ever, right? The Mideast conflicts continue to deteriorate, with humanitarian disasters in Syria and Sudan that can’t seem to get anyone’s attention. China’s Supreme leader Xi Jinping has tightened his grip on lifetime rule. Vladimir Putin shrugs off the mounting evidence of efforts to manipulate western politics and media, while former Russian spies are poisoned in England. Here in the US, the White House turmoil continues. Our leadership in world affairs has evaporated, and environmental programs, scientific research and progressive immigration and social justice programs are all under attack. It seems democracy itself may be failing. Public approval of Congress is at records lows, and nobody seems to trust the media – except for the media you happen to agree with…

It all seems so depressing – a huge black cloud. Well, in the 17th century, John Milton coined the saying that every black cloud has a silver lining. Could this still be the case today?

Well, here are some interesting observations. President Trump was elected, in part, because of his position that climate change brought about by human activity is fake news.   Climate denial has gotten a big boost and been legitimized by the extensive coverage of climate deniers in the media. Moreover, the media coverage of climate change has been dominated by the President’s statements and actions – there has been very little about the science – and almost nothing on the connection between climate change and the many extreme weather events we have experienced. So here’s the kicker – when it comes to climate change, and other issues, it seems any publicity is good publicity. Public awareness and concern about climate change has been heightened by all the controversy. As Jeremy Deaton recently put it: “the public has grown more concerned about the climate, [and] it has also become more trusting of the press and more supportive of immigration.” Add to that the fact that environmental groups have had a record year in new member recruitment and financial donations. There is a big, new infrastructure being built in the environmental movement, thanks to President Trump.

Here’s another interesting story. Donald Trump was elected President, with the staunch support of the NRA. Remarkably, gun sales in the US immediately plummeted, since gun owners no longer feared new gun control measures.  Early this year Remington, America’s oldest and perhaps best-known gun companies, had to file bankruptcy.

But the gun story is complicated. We had to face terrible news about guns in the past year – it was the worst year on record for mass shootings in the US – 26 dead in a church in Texas – 58 dead and more than 500 injured at a Las Vegas concert, – and in February, 14 students and 3 teachers murdered at a high school in Parkland Florida. These tragedies often stimulate gun sales as well as public outrage. But this time, the courage and passion of the survivors in Parkland have fired up a national debate under the banner #NEVERAGAIN that may lead to the most significant improvements in gun laws in a generation. There are now more members of Everytown USA for Gun Safety than there are members of the NRA.

President Trump’s election last year also seemed to be a bad omen for women’s rights. He is the subject of a number of accusations about possible sexual misconduct, and he once defended his own disrespectful remarks about women as “locker room talk.” So it was rather remarkable to see more than 5 million women, and supportive men, assemble in protest one day after the inauguration – the largest protest in US history. From this base, organized protest and resistance activities against the Trump administration and its policies, all of it peaceful and non-violent, have continued to grow and the organizations have gotten stronger. Consider this – in the two years before the 2016 election, 920 women contacted Emily’s List for help running for political office. Since the election, the number surged to 30,000. As Stephanie Schriock, President of EMILY’s list said in an NPR interview: “We’ve never seen anything like this.”

Something bigger may also have taken place. Do you think the empowerment of women in the early 2017 protests may have helped build cultural support for women to call out disrespect and abuse? In October, we saw the beginning of a cascade of accusations and revelations of male sexual abuse, triggered by reports of sexual assault and intimidation by Harvey Weinstein. From this watershed moment, an international movement began. Millions of women responded #METOO to the Weinstein scandal, exposing decades of sexual abuse and coercion. Many men have fallen from positions of power and privilege as a result. Our culture has, I hope, been changed for the better.

There are many other examples of good things that follow in response to terrible events. This can be true at the personal level, the community level, and at the global level.

But one thing we have to remember. We see the black cloud before the silver lining. We see the tragedy before we see the human courage and resilience that responds to it. We see the lie and the hypocrisy before the true facts prevail.

So the lesson is clear – do not get discouraged. Continue to be vigilant, to seek out and promote the truth and to support actively the things that you care about. You may not see a positive outcome yet – but we need to have faith that human beings are basically well intentioned – and the to hope that together we can build a better future.

So let’s get busy:

Thanks for listening – Enjoy some silver linings today! 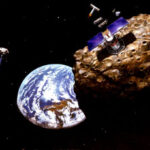 Next Story
THE MYTH OF DEMOCRACY: WE ARE FOOLING OURSELVES!