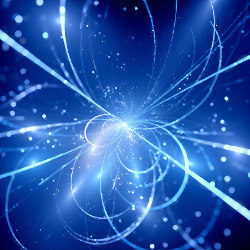 Originally published May 9, 2012, in the Forum on the Integration of Science and Spirituality

The field of Physics has been confounded for nearly a century with intractable puzzles.  It is also rife with contention between religious and atheist points of view, with both sides claiming proofs, or more precisely, un-proofs, for their points of view.   A recent example is Michael Shermer’s “Skeptic” column in the May 2012 Scientific American, titled “Much Ado about Nothing”.  Mr. Shermer borrows his title from Shakespeare’s romantic farce, a remarkably apt context for his article, but he is apparently oblivious to the irony.

At the core of modern physics is a conundrum:  how can we reconcile the deterministic precision and beauty of classical physics with the bizarre probabilism and indeterminacy of quantum mechanics.  Both are confirmed as true experimentally in the contexts in which they apply – yet both are contradictory at the conceptual and mathematical levels.  Many theoreticians, including the greatest physicists of the past century, have labored in vain to bridge the divide, and the efforts have been given a variety of labels such as super symmetry, string theory, superstring theory, and M-theory. Notably, one of the mysteries of these theories is the lack of a defined pathway or “prescription” for the physical reality in which we exist – the precise configurations of physics in our universe seems to arise from a non-deterministic substrate with variable probabilities.  Why does this world arise from those indeterminate probabilities rather than some other?

The name “M-theory” was coined by Stephen Hawking and was recently explored in the book he co-authored with Leonard Mlodinow in 2010 titled The Grand Design.   Hawking also helped popularize one of the proposed “solutions” for indeterminacy – the concept of multiple universes.   Since the quantum substrate can lead to a variety of possible configurations for the physical universe, as we know it, the theory says that, in fact, those different configurations do come into existence as multiple universes; however, we are only aware of, and exist within, a single one.

Michael Shermer’s article provides a short review of this concept, and then adds an additional conceptual layer drawn from a new book by cosmologist Lawrence M. Krauss titled A Universe From Nothing.  In short, this concept builds on the notion that given quantum formulations, “universes can, and indeed will, spontaneously appear from nothing”.  Shermer quotes Krauss as concluding: “Quantum gravity not only appears to allow universes to be created from nothing-meaning… absence of space and time-it may require them.  ‘Nothing’-in this case no space, no time, no anything! – is unstable.”

This speculation, and the very difficult mathematics from which Mr. Krauss likely draws some of his inspiration, is very interesting, but it hardly resolves the key metaphysical question of ultimate causation.  Yet Mr. Shermer does not hesitate to brandish the speculation as a remarkable “un-proof” of the existence of God.  According to Mr. Shermer, we no longer need a prior cause of existence (e.g. God), because quantum physics shows how the universe can be created from nothing.  Moreover,  “even if God is hypothesized as the creator of the laws of nature that caused the universe (or multiverse) to pop into existence out of nothing – if such laws are deterministic – then God had no choice in the creation of the universe and thus was not needed.”

Mr. Shermer needs to review the basics of logic.  First of all, one needs to be precise in defining terms, and the definitions of several of the terms he uses, like “God” and “nothing” and “created”, are notoriously difficult.  Minor nuances in those definitions will make a huge difference in the conclusions one is able to draw.  For example, the concept of nothing is itself a paradox – how can one have any notion of what has no existence?  Using it in a proof is analogous to dividing a number by zero – which is, indeed, in the mathematical sense, the difficulty the physicists are facing.  Mathematicians do have a convention to answer the problem of division by zero – a value defined as infinity.  But this definition does not solve the problem – it merely puts a different, and convenient, name to it.

Rising Above It All

More significantly, Mr. Shermer should hesitate before leaping to any particular definition of “God”.  While simplifying that definition may be useful in a rhetorical sense, giving free reign to define the term as a “straw man” that can be knocked down, such attacks are a disservice to logical, skeptical inquiry and an affront to rational, dispassionate inquiry.  Mr. Shermer needs to bring some of his healthy skepticism to bear on his own arguments.

After all, one of the simplest definitions or “names” of God, one that has served as a base for a number of the world’s greatest religions, is itself both question and answer and stands well outside of Mr. Shermer’s simplistic generalizations: 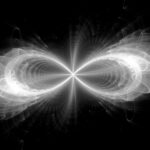 Next Story
A Puzzle of Mathematics